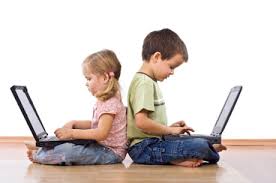 Before I get into some of what is being advised to do in 2016, let me share a few things with you.  One of our granddaughters is four years old.  She has been around smart phones, IPads, and computers all of her young life.  Before she was two, she could sing nursery rhyme songs and name Disney characters from games on these tools.  There was a time and a place for them, just as there is now and always will be while she is a child.

Last year this child knew the code to get into her Mom's phone, as well as mine.  We are responsible adults and have places on the devices that she knows how to operate, including the camera and taking selfies while traveling in the car.  When she wants to talk to me or other family members, she has known for quite a while how to call or FaceTime any of us or send a gif as a text.  Some of these things she has figured out on her own.  Some of them she has watched and learned.

When I picked her up from kindergarten one day recently, we came in the house for a snack and a coming down from the day time. She asked if we could watch YouTubeKids.  I, being from the pre-historic era, told her that we did not have that here on our TV. Quickly she asked politely for the remotes so that she could show me that I was mistaken.

Now, I must admit that I have step by step directions on how to get myself to Pandora Radio, Netflix and just the regular TV channels. Again, I am sharing this so that you know I know just enough to be dangerous. In my opinion, watching TV has become way too complicated. Bailey Grace at this time, very confidently showed me how to get to YouTube for Kids.  I just stared at the TV.  Bailey had to call my name repeatedly because I was that much in awe. How did she know this stuff?  The same way she knows how to get around on the computer.  Now, I ask you, is this a good thing or a bad thing?

You can find research that says this is a terrible thing.  That no child before the age of 6 should be allowed near a computer or smart phones/tablets.  And, you can find research that states just the opposite.  Instead of totally embracing or totally escaping this high-tech world that we live in, this expert (ME) is going to venture out and tell you that we have to find the right balance.

The right balance means both mentally and physically.  Just as I had time limits and monitored what my children watched on TV back in the day, today's parents need to also have time limits. Children need to hold real books, too.  They have not become obsolete just yet, even with the ever popular Kindle.  Children also need physical activity outside and they need to learn how to play board games.  Just as parents read and play these games with their children, they also need to join in with them on the IPad or technical device to make it a "together" time.  If you are reading a story together, stop now and then to ask questions about what might happen next or how do you think the character was feeling. There is a lot to be learned from technology and I don't believe any parent wants their child to be left behind.  Find the balance.

More and more textbooks in schools are available on-line.  Some of the testing is done on-line.  Teachers are finding that they must stay ahead of their students, or at the very least know as much as their students seem to know.  This is a true story.  Thirty years ago, my son was in first grade.  The school district that he was in had purchased computers for the classrooms.  All teachers were to take attendance and send it to the office, as well as the lunch count to the cafeteria manager so that she would know how much to cook. The computer was the same computer that we had at home.  Our six year old knew how to operate this Commodore 64.  His teacher did not and had no idea about what to do with it until my son got on it to show her how.  From that day forward, Doug was known as the whiz kid of technology.  Fast forward and that same boy graduated from Tulane with honors in two majors:  Computer Science and Computer Technology.  This has been a major part of his career.

We want our children to be connected to the ever evolving digital world. Simply knowing how to use computers gives them academic confidence and entry level skills. It will open the door for questioning the real world and being able to see things such as a butterfly emerging from the chrysalis or visiting museums that many will not be able to physically visit yet on a small device seeing the whole world. It would not be fair to take that kind of knowledge away, nor would it be fair to simply place them in front of a device for endless time and walk away.

We need some "Take Charge Rules."  Always set a realistic time limit on media use, which may change depending on homework or projects from school.  It is also a good idea for parents to 'unplug' themselves.  Does the TV have to be on, even when no one is using it.  Some quiet time or softly playing music may be more soothing. Teach children about table etiquette as far as cell phones go.  It totally amazes me to see families out at restaurants and everyone is looking down at their phone.  Where is the conversation?  Also, be skeptical of what you allow your children to view.  Just because it says YOUTUBE for KIDS?  Some of the things that are on there may not be age appropriate for all children.  Stay nearby and monitor.  Be engaged with them.

Our eldest granddaughter has conversations with the Amazon Alexa.  She has learned to call out her name to get her to play a song she wants to hear or to add her favorite treat on to the grocery list, as well as telling her, "Good Morning."  Alexa replies back with another, "Good Morning," and then goes on to give out a fact about that day.  It starts off a whole conversation about 'National Donut Day' or 'Friends Day.'  When Bailey is riding in the car, she also talks about the GPS telling us to turn right or left and why. This is a part of her world.  This is a part of all of our children's world!

We all want our children to be smart media consumers.  It is up to us to lead the way.  Here is a poem by Rudolph Rinaldi that may give us the reason of why it is so important for us to lead the way in the balance of using technology:

FALL
Fall and
red yellowing leaves in the trees

Our children are living in the 21st century.  It is our responsibility to live in the same century as them.
Posted by djmilestones.com at 10:44:00 AM