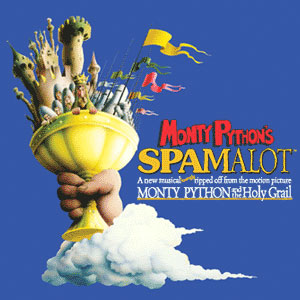 It is a fact, that my American biological son is the one who introduced me to British humour, long before I had met and married my British husband and then had a British son added in to the family.  He was barely in high school and asked me to watch a Monty Python movie with him.  Monty Python and the Holy Grail was the movie and I must say that he was in hysterics laughing at the lines in the movie.  I sat in quiet, profound stillness, just trying to understand what was so funny.

This is where the oxymoron comes in to play and does it ever come flooding towards me in so many ways.  Even though, it has now been going on fifteen years, I will admit that so many times my dear, sweet husband must explain one of his jokes to me.  I would guess it to be about 75% of the time, although he probably would disagree and say closer to 90% of the time.  Sometimes there is just a gray area that I have chosen to ignore.  It is not that it went over my head, I just let it go in one ear and out the other because it was so not funny.  There are those times that I just have to laugh out loud because I actually did get it, to the point of exactly just how bad the joke or pun really was.

While looking up some research on British humour, I found loads of information.  One article that was not credited to any particular person started off by stating that the article may be Overly British.
Americans may not understand humour, only humor.  Canadians and Australians may not understand anything at all.  (not my words, just a messenger) To explain this statement, the writer of this article mentioned that Americans obviously watched too many episodes of Friends and therefore can't appreciate humour.  It was also noted that Americans need to have background canned laughter to know when to laugh and what was funny.  Let me just add that the background canned laughter has always driven me crazy.  I do not need to be told when to laugh and what is funny, however, some TV producer or director obviously felt differently.

Most informed, educationally sound people do understand that the British are well known for their sophistication in most all aspects of their lives, including their humour.  They even joke about the U added in the word humour (as well as other words where Americans drop the U).  The Brits say that after all, they invented the language, therefore they can do with it what they want.  The Brits most definitely go for ironic humour and will tell you that comedy is so important in Britain that even the head of state (the Queen) and every member of government is a joke. (Hey now, let's not even talk about members of government here in the United States!)

A perfect example of British humour is in a Monty Python sketch of " the dead Norwegian  parrot."  The audience is laughing hysterically.  I am simply looking to my left and to my right and trying to guess what is so funny.  Maybe it is all me.  Brits are known to have wit in their humour.  Perhaps I am not witty enough to get it?  I am still stuck on trying to figure out if Norway would have parrots, dead or alive?

Besides wit and irony, the Brits also use quite a bit of sarcasm and self-deprecation.  They usually find humour in everything and everyone, even themselves. Be sure to YouTube some of these sketches of the dead parrot, Monty Python, Spamalot or even the silly walk if you are not familiar with what is funny in a British sort of way.

Another tradition that I have been introduced to are Christmas crackers.  These are nothing to eat, instead, they are wrapped up paper that reminds you of a large firecracker that you pull apart and they pop loudly with all kinds of gizmos popping out.  One will always be a paper crown that everyone puts on their heads so that at the Christmas dinner table so that all can look ridiculous together. There will be little token toys and a riddle or a pun on a small sheet of paper that are really awful.  Such as, "Where do fish wash?  In the river basin."  Or how about, "What do you get if you cross a sheep with a kangaroo?  A wooly jumper!"  It worked on me even though a jumper in the US is a sleeveless dress worn with a blouse. However, in the UK it is a sweater vest.

Once I discovered that there are basically five types of British humour, along with being able to cite an example, I was able to understand a little more about this strange kind of humour.


One last item to note is that in the UK, there are certain geographical areas that are known to have more humour than others.  Apparently a sociologist, Dr. Rod Martin, gathered up a research team from Ontario and discovered not only this supposed factoid, but also did believe that Americans totally understood irony. The truth of the matter is that the level of wit and sophistication of sit- coms such as Friends  demonstrates America as being clever.  In this study, he claimed that Brits are all about being silly with silly people, yet in a witty way. Americans are all about being clever without the silliness.  This was duly noted when the team made reference to the differences between the way Britain's The Office was portrayed by Ricky Gervais which had quite a bit of wince-inducing lines thrown in the TV show versus the way that Steve Carell portrayed the character with his lines.

You are obviously still reading this blog to find out which regions are more funny than other regions.  Well, the funniest part of the UK is Wales, followed by Ireland  They have the most jokes about themselves.  Any sentence containing the words "Welsh" and "sheep" is considered extremely funny.  Plus the Welsh suffer from a dangerous accent that has been known to kill people through pure oratory power.  Ireland comes next due to the copious amounts of
alcohol consumed there.  Cornwall follows closely.  Let's just say the standing joke is the twisted tourism slogan, "Come to Cornwall where Bob's your Uncle, AND your Dad!"

On that note, Scotland is considered to be the least funny part of the country, as the people there are scary and no one wants to fight them, plus their accent is so scary no one can understand them anyway.  It was noted that here are places that everyone can make fun of including Liverpool, Burnley, Cumbria, Birmingham, Dudley, Milton Keynes, France and America.

All of this seems extremely complicated to this American.  When this was proposed to the "research team" their response was that it all boils down to genetics or the water in the UK.  It is an unstudied fact that in theory the British people have ended up with more of the fundamental particles of humour than other nationalities based on the hypothesis of the fluorine added to the water in 1924 to help with dental care. This was because every single dentist in the country had been killed in the First World War.

There are many things that you must admire about British humour. Definitely, it teaches you not to take yourself too seriously, along with making light of tough situations.  In my opinion, we need to lighten up and stop believing that we are entitled to what we have not earned.  British humour delves right into all of the above.  Also, on that note, it is okay that different nationalities do not get all of each other's humour/humor.  It does not make anyone less intelligent or witty.  Just be yourself.  Give it up and laugh a lot!  It is so good for your soul!