GRANDMOTHERS ARE SO SPECIAL!

What do you think it is about Grandmothers that is so special? Worldwide, they all have wonderful attributes that make their grandchildren gravitate to them. I know that I can remember mine and she was everything that a grandmother should be. She always looked fantastic, cooked and ate well and she showed me how to cook. Most of the recipes were just up in her head. Rarely did you find her using a recipe book. I wrote down what ingredients she put in but had to guess at the amount because she never measured. 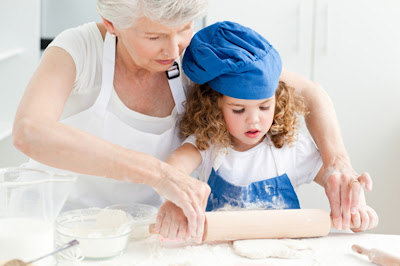 Grandmothers are the ones that we go to when we have a problem, no matter how big and important it seemed to me, she was able to put it in perspective  to look at calmly. She always gave me the 'big picture' just to show me that it was not the end of the world. I can hear her say, "Honeychild, just don't worry your pretty little head about it. All will work out and these cookies and milk will help." She was right.
Your Grandmother can be your biggest supporter, the one who cheers you on and comforts you but Lordy Mercy do not ever sass her. She will put the FEAR in you as fast as a New York minute. That presence, no matter how far away I may be from her physically or how old I was, this was what kept me in line. I was a fast learner and it only took a few times.
Then there is the pocketbook of a Grandmother. Always had hard candy, gum and tissues inside. The other magical things inside this pocketbook was her spare pair of readers, an actual checkbook, along with essential make-up, especially lipstick and lotion. No woman should be without these things. She clutched it as if it contained the secrets of the world in it. Yes, it was like the Mary Poppins bag. Nothing that she brought out from her pocketbook would surprise those around her. 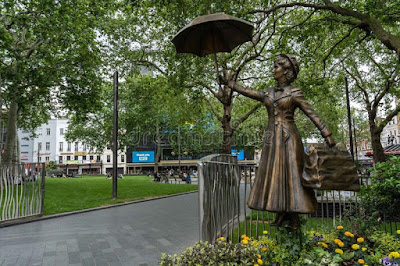 Most Grandmothers also had that delicious, calming smell that I never figured out if it was the lotion, perfume or some concoction of what she cleaned things with. No matter what, that smell immediately brought me back to hugging her when I saw her.
My Mamaw took up for me when it came to my Mom. When I was a teenager, mini-skirts were very much in style. My Mom did not like them one little bit. Not only did my Grandmother buy them for me, she sewed some of my coolest outfits ever. She did this somehow without irritating my Mom too much. Mamaw was a top notch negotiator. She would bring up topics that my Mom took her through that really stopped the negotiations because she was telling the tales of back in the day when my Mom was younger. It reminded my Mom that maybe I was not such a bad kid after all.
Most all Grandmothers can inspire their grandchildren to always do the best that they can. They truly are magical that way. They feel as if they have earned the right to spoil their new grandchildren. I have noticed though that so many of today's generation of Grandmothers really want a sweet and sassy nickname instead of Granny. Nothing is wrong with that or the formality of Grandmother. I have taken a poll of some of the popular nicknames for Grandmother. Some are cultural but for the most part they are universal. The only rule is that it must start with the first grandchild and the others will follow suit. 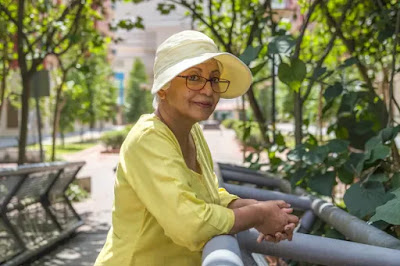 Mimi and Mamaw were already taken in my family. So leaving those out, these are the ones that I considered for myself and sometimes a little fact or opinion about it:
Nanni (too much like a hired nanny)
Nonna (Italian)
Bubbe (the late Justice Ruth Bader Ginsburg's name)
Abuela (Spanish)
Glamma (for the glamorous Grandmother)
Lovey (Kris Kardashian's name)
Lola (Filipino - and a good friend shared this with me)
Cookie (sweet)
Bibi (Swahili)
Lolli (goes well if the Grandfather is Pop)
Mimzy (quirky)
Babushka (Russian)
Yaya (Greek)
Pipp (free spirited)
Tootsie (spoils with candy)
Nai Nai (Chinese)
Marmee (from Little Women)
GiGi (just a fun to say name)
CoCo (warm and comforting)
Bella (beautiful inside and out)
LaLa (musical)
No matter which name you choose for yourself, be sure to love it because it is close to impossible to change it to something else. 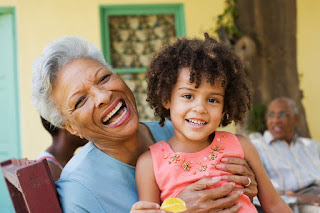 Grandmothers also have certain sayings. Some of the ones that I listed may be some of your most memorable quotes too.
Bless your heart. Come over here and let me see that boo-boo so that I can kiss away the hurt.
You have such a pretty face. Don't you want to pull that hair back to show it off?
Did you forget to put on your lipstick, honey? Here, dab a little of mine in case we see someone we know in the grocery.
I wish you would look a-yonder. A woman her age has no business wearing such as that.
Lordy mercy, sakes alive!
I am all give out.
This tastes pretty good even if I did make it. 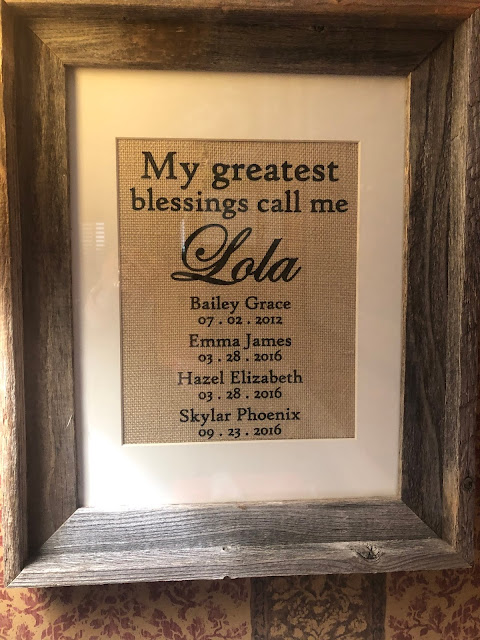 Last Mother's Day I received this framed picture with Lola's Blessings. We just added one more granddaughter this month. Freya Louise! And more to come later, so we hope. Definitely will be a Part 2 of Lola's Blessings. It can hang right beside this one. Being a Lola is such a special honor!
One of my favorite pictures and quotes: 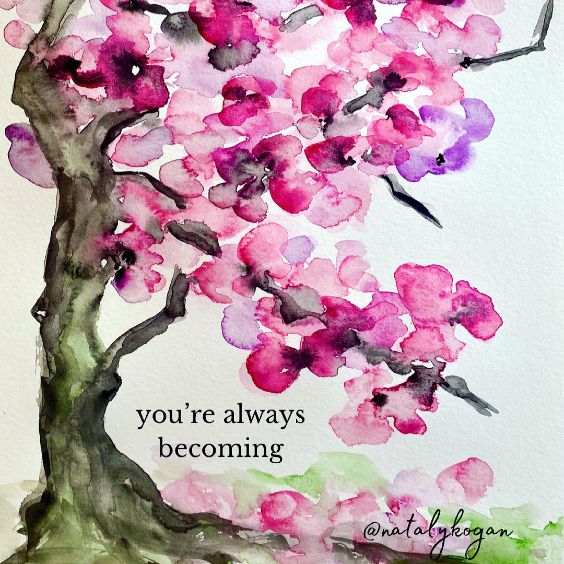