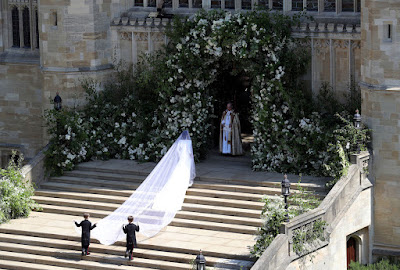 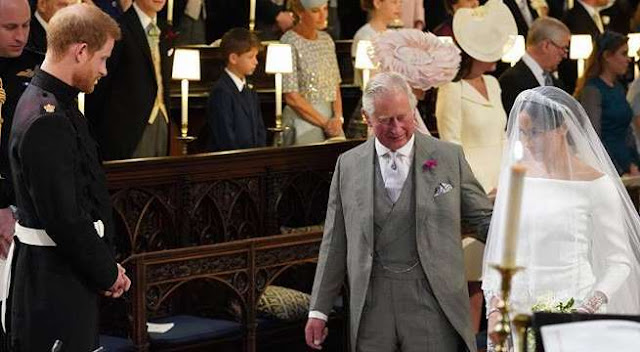 Many of us in America woke up bright and early Saturday morning to watch the Royal Wedding. Of course, there was quite a bit of pomp and circumstance that goes with it. Here in America, you could take your pick of which channel you wanted to view it on, therefore it involved different commentators.

Then there was the BBC America to watch it on. Due to the different languages that the two countries speak (one Proper English and the other American English) as well as the fact that ordinary weddings are so very different with protocol, much less throwing in a Royal Wedding, which adds a different perspective altogether. We, as Americans, really have no clue as to what is or is not protocol in a Royal Wedding.

All of the social medias were abuzz with what they did right and what they did wrong. We had one friend who went out to get the Rosetta Stone on the subject to understand the culture better. As for myself, I had a very good deal of having a 'real, live Brit' that I happen to be married to, feeding me information that I otherwise would have missed.

The one thing that I found very noticeable in the commentating was that the cameras stayed off the BBC commentators and focused their cameras on what they were talking about. The American commentators had the cameras swing in for a shot of themselves. Let's give them the benefit of the doubt...was this to show their viewers that they really were live at the wedding, and not just in their American studio talking about what was taking place?

Another noticeable difference, at least on the American channel we watched, was that so many details were omitted. Was this because research had not been done or someone just did not think of it as important? Everything was planned down to the very last detail in this Royal Wedding. For example, the  escorts were all men that had served in the military with Harry. Meghan's white veil, they revealed, had the fifty-three countries of the Commonwealth represented by being embroidered along the edges of the train. Wouldn't some of these facts been helpful to share?

This wedding ceremony was like no other Royal Wedding. It was a fusion of the very best of the American and the finest of the British, yet it was even more than that. It was a bridge between cultures. With a British black choir singing in a cappella, "Stand By Me" and following in music was a very talented 19 year old male cello player from Nottingham. The St. George Choir was next with their amazing harmonizing of voices.

Let's move on to Rev. Bishop Michael Curry. It was clear that it was not to be a standard Church of England sermon. He was from America and the Presiding Bishop of The Episcopal Church.  Almost as soon as he started he put the script away and went off on his own bold, loud and fueled with passion words. (His sermon was to last for 6 minutes, however, it went on for 13 minutes.) He used the word 'Love' 58 times. As he spoke, cameras were scanning the people at the wedding and there were all kinds of facial interpretations. 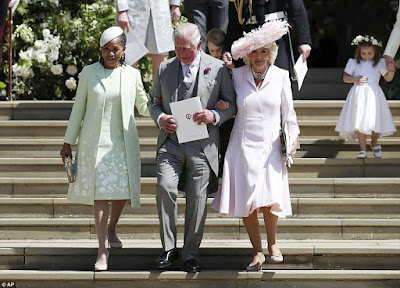 As the procession was leaving the Chapel, Prince Charles had his wife, Camilla on one arm and walked with Doria Ragland, Meghan's mom on his other arm. How very dignified and charming she behaved. Usually, it is the mother of the bride who is also in the limelight. This Royal Wedding did not have that in any plans. Not to be cruel...it is just the way it is for a Royal Wedding. Very gentlemanly, indeed, was Prince Charles. This mother of the bride traveled over to see her daughter marry Prince Harry and become the Duchess of Sussux, not the Princess. The commentators that we listened to continually called her a Princess. One way to help remember this is that the Queen's husband is NOT a King. This is the way British history has been from the beginning of time. If you really want to be confused, look up who is in line for the throne. (maybe for a future blog) 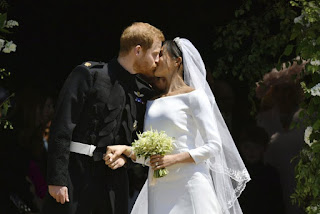 It was a very long day for the newlyweds. They even changed up some long standing Royal Wedding "to do's and not to do's list). They held hands most of the time. They had a public kiss. After they attended a reception of 600 people, they went on to the next reception that was more intimate with only 200. 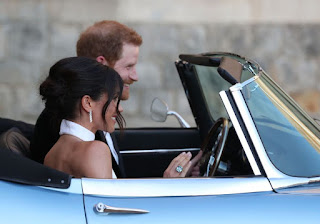 They will always be in the spotlight. That is the way it is. I just know the two of them will find the time to have their own special times together without cameras all around. Look at the love in their eyes!
Posted by djmilestones.com at 3:53:00 PM