Overcoming the Fear of Writing

For me, as a writer, I believe that I have a deep, dark fear somewhere in me about writing. Never have I ever felt that it is not a FUN thing to do. It is when I am at my highest floor on my mood elevator. The fear of writing that plays inside my head is that it will not be good enough.

There is one thing that I have learned as a writer, which is that there is no one right way to go about it. Each writer must find what works for themselves. Sometimes I worry that I change the way that I enjoy writing too often. There are times that I love putting pen to paper. Words seem to flow effortlessly that way. Then, my mind changes and I go back to my computer. It is a bit of a challenge because I prefer my novel to be in one style or another. I suppose that I should be happy that I do not have an old fashioned typewriter, although I have dreams of using one. Also, it is good that I am aware that I am just too messy to use a real fountain pen that is dipped in the ink. If so, then I would have other styles to pull into one common thread.

After writing out a whole chapter by hand, eventually, I must go back and type it out. It sort of, kind of works for me in that it is a start of a first edit. The other positive side is that it helps me to see the timing of events that I am writing about. I was able to correct a major problem with my timing by doing this which helps correct problems that would pop up in later chapters and cause major editing issues. 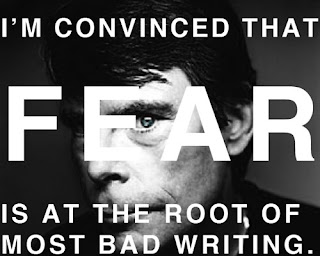 Even Stephen King knows that the fear must be tossed to the side. Just write! Almost every single author will tell other writers to just write. I was doing that. Writing some every day. Only one person have I given some chapters to read and critique. I believe that he was honest and not totally biased. He had some very good ideas to tidy up and fix. This person happens to be my husband who is also writing. Plus, he serves as my marketing representative and has helped in getting me off to a good start.

Next, a good friend suggested a Writers' Workshop that was local. I decided to bite the bullet and go. Not knowing that once registered, the author, Susan Cushman, who would be leading the workshop, asked if we would like, we could send her up to 15 pages for her to critique.

I was a little leery and could feel the insecurity of my writing slipping in to my thoughts. It was important that I got a handle on this fear simply by thinking in a common sense fashion. I am a writer. I write because I love it and hopefully others will want to read what I write. It was a good thing that I managed to get control of my fear because she sent out all of the manuscripts that were sent to her to all of the participants. 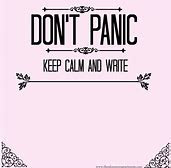 This was my mantra. Keep calm and write! And so I did. 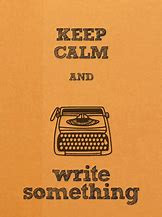 This really got me motivated to stop the worrying that my writing was not good enough. During the day-long workshop, we all talked about each other's submissions. It helped to have a "cheat sheet" for those of us who were amateurs in critiquing another's writing. We were not the grammar police or spell checkers. Simply helping the writer know how strong the character seemed or the plot of the story was powerful. We knew we were not suppose to be gooey, sugary, or sappy. Be positive where it was a strong point. As a former educator, I was very excited that everyone in the room offered positives to all of the submissions. When something needed worked on, it would be a suggestion, such as, "Have you thought about having more dialogue, versus telling about it?"

This was so helpful for me, and I am believing that it was for everyone else who attended. Truly, I felt spurred on and that had me go back and put some suggestions in what I had already written so that I would be starting back on my ending chapters in the same kind of voice. 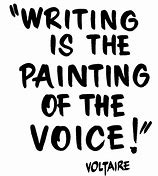 As far as being fearful of sending off queries to be published in the near future, I am going to hang this near my desk, in case I slip back now and then: