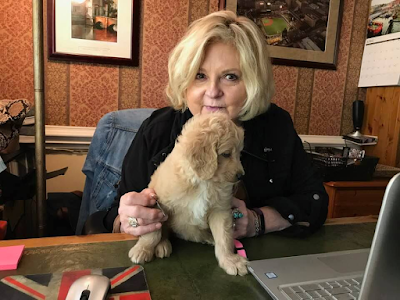 Just to let you know that for sure getting our new puppy, Maggie Mae, for a little sister to our 2 1/2 year old was the right decision. She has already made her way into all of our hearts. She is a roly poly bouncing little bundle of joy, not only to Steve and me, but to Davis. Plus, as you can see, she believes that she is a writer also. Her thought bubble is saying, "Just let me get my paws on that keyboard and I will have a best seller." 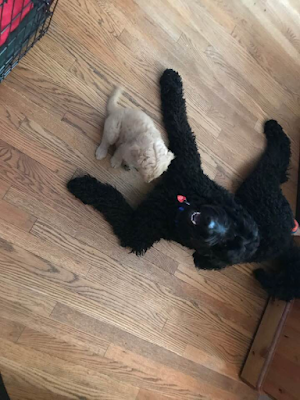 The day before we picked her up, Steve told me that he wanted to ask me a serious question. He asked if I truly thought that we were doing the right thing by Davis. He had been number one and here we were bringing in another puppy. With all that I had read, two doodles are supposedly better than one. They entertain each other and give you twice the laughter with their entertaining antics. We discussed that we would always be very aware of keeping Davis as the number one older brother and he would continue to get all the love that he needed. As you can see from the picture on the first day we were home, they were inseparable. Davis seemed to be very protective of his little sister and Maggie Mae followed him everywhere.

We had Davis involved from the get go. He went with us to his birthplace and to see his breeder and all of her new pups. We had one out at a time to see if we witnessed any bonding whatsoever. Maggie Mae immediately responded with a wagging tail, as did Davis. They even nestled their heads together. That cinched the deal. We had to wait almost two weeks before she would be old enough to come home with us.

On this occasion we had time to prepare. We were so not prepared for Davis when we picked him up. We had to stop off with him at Hollywood Feed to get some of the necessities for having a puppy. Like a water and food dish, a collar, a leash, and some little treats. Our daughter happened to be in the general area and brought our granddaughter into the store to meet Davis. Bailey Grace picked out a toy for him and it remains his favorite toy. All we had was the blankie that Kim gave us which had his parents and siblings scent on it and a small bag of the food that she had been feeding him. Since we had decided to crate train him, we had to take a wild guess at what size to get. Luckily, we did guess the right size.

Now we were able to go into Hollywood and pick out the things that we would be able to have in place for when we went back to pick up Maggie Mae. Again, for the crate size we had to guess. We went one size down due to the fact that she is female and based on her mother's size, only time will tell. One of Davis' sisters surpassed not only their mother's weight, but the father's weight as well. She is a whopping 95 pounds, without an ounce of it fat. Davis is just 65. Our hopes are that this new pup will stay in the 40ish range.

We ordered the chew-proof crate bed pad that was the only crate bed pad that our chewing Davis has not torn to shreds in 2 years now. So we do have experience and we knew that we would be ready to handle this. The hard days are in the very beginning. Some sleep deprivation, going outside with her every hour or sometimes even half hour. They tend to train their owners on when to get them out. It is "Puppy Owner: Beware."

New items for Maggie Mae were put out slowly to let Davis adjust to it all. The time had finally come to drive down the road and pick up our new bundle of joy. She and Davis continued their bonding. He was down on the floor and just let Maggie play with his long curly tail. 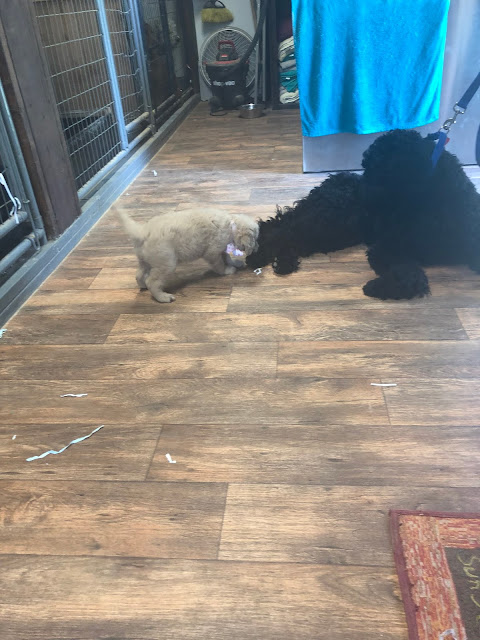 The drive home with Davis was so different than the drive home with Davis and Maggie Mae. Davis was of course, the only pup in the car and he slept all the way on his blankie in my lap. Maggie Mae, on the other hand, used me as a mountain to try to climb over to get to the back seat to see Davis. She really gave my arms a work out. Such an inquisitive little girl. Given her age, she did take a break and rest on the hour drive home ever so often. 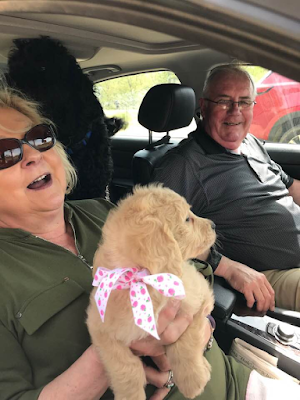 She has only been with us starting on Day 4 and even through some trying times that we never expected, we know that we made the right decision. When you bring a puppy home, hopefully you know there will be some accidents now and then until totally house-trained. We were prepared. Trying to be vigilant on the timing to take her out, we avoided many accidents. After one night she slept through the night. In fact, Steve woke up at 5:30 to check on her. She had not had an accident and only woke when she saw and heard him. Smart man that he is...he got her out, along with Davis. Finally, the rain was not coming down in buckets like it was most of yesterday.

Today, we can have a sense of humor about the major accident that took place yesterday. I will start just by saying that we RARELY take our eyes off Maggie and she is where we are. Somehow at one point she went into the kitchen and did a little puppy poo right at the gate that leads outside. Steve went up to do his workout time and passed by on the other side of the gate, never seeing it. I took advantage of no one in the kitchen and switched on our Roomba vacuum and kept the puppys with me in the Study.

Steve came down and called me in while telling me that we had a problem. A problem!?!? We had poop tracked all over the floor. It was one of those moments that happen, and your mind is racing, what do you do first?


Next step was to take the Roomba out to a neutral location to dry out. I would deal with trying to put it all back together tomorrow. 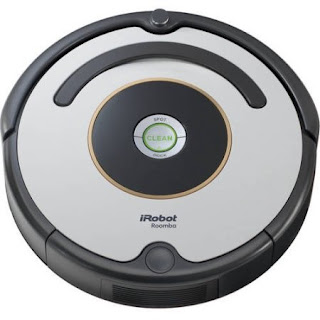 The good news of this day was that our precious puppy rewarded us by sleeping through the night with no bathroom incidents. For now, our fingers are crossed that the Roomba, after me piecing all the parts back into their locations, will charge and work.

The deal is that we must remember those first few weeks of having Davis and to remain patient and keep our sense of humor. Really? Think about it...puppy poo and a Roomba. I am sure it is not the first time this has happened. We are just hoping that it will never occur again in this household. 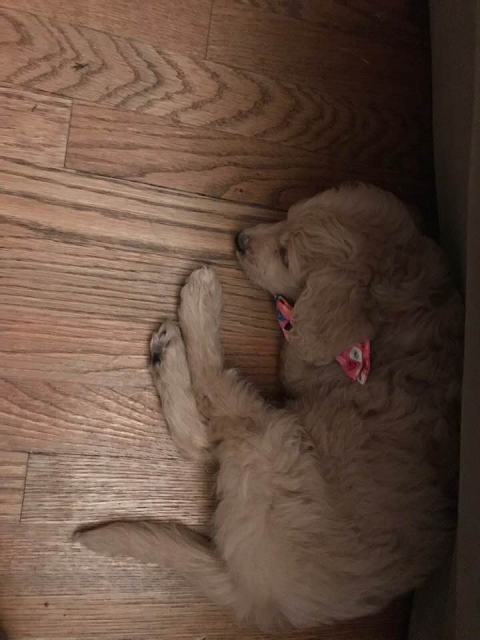