It Is All About Space 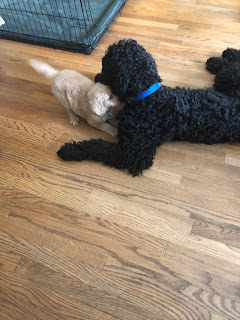 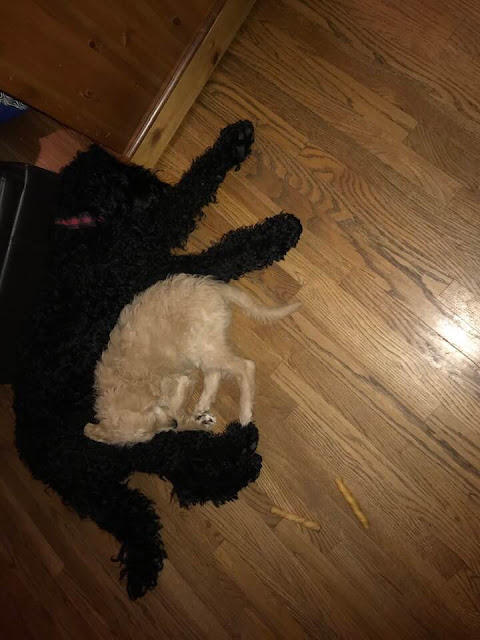 When we decided to become a two doodle family, we thought that we had it all worked out. For a while, our plan came together. The study, where I work could hold both of their crates and the smaller bed plus give me my desk space and a love seat. With a little creative storage ideas, it was a solution. Our two dogs loved to cuddle together.

Then, although Davis was his full adult size, Maggie continued to grow. As she grew, their activities started to prove that they needed more space. 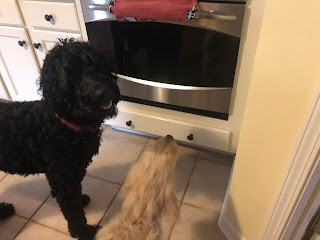 So, we opened up the doors that led into the kitchen. We still kept the gate on the other side of the kitchen to the breakfast room, as well as the large four way wooden gate that stretched across the foyer. Keeping the laundry room and powder room doors closed also limited them to two rooms now. They played and chased each other around the kitchen island. Maggie discovered her reflection in the bottom oven and loved barking at herself. Davis just sort of shook his head as if to say, "Silly puppy." 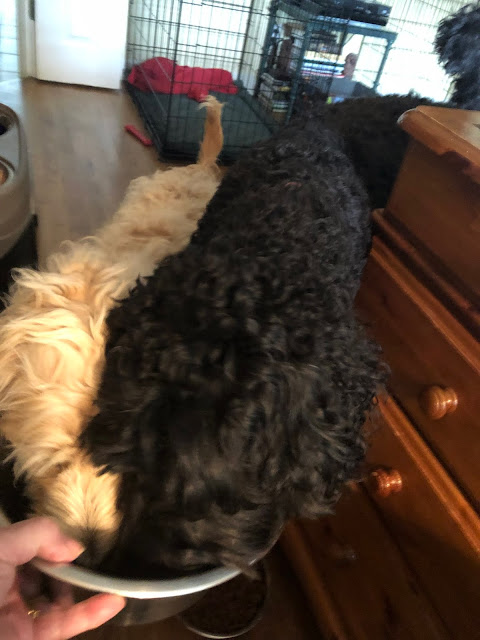 They seemed to share everything. Sometimes I gave in and instead of holding each of their food bowls in different hands, I just let them eat out of one. Never has there ever been any growling or snarling over food. However, if we give them each a frozen bone marrow, Maggie is happy for about 1 minute, then she attempts to get his and take it over to where her bone is. Sweet, gentle Davis, being the big brother that he is allows it for a while. Then he taunts her with a toy and goes in for his own bone. They work it out in ways that only a brother and sister can.

Davis used to have the whole top of the love seat to himself until she decided she like that spot too. 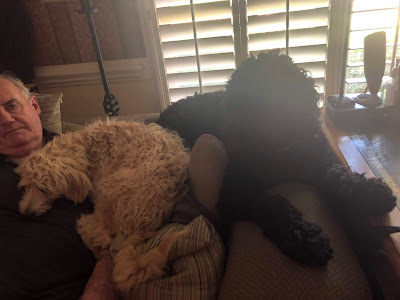 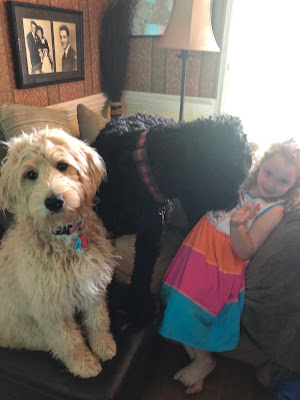 Both of the dogs think they are still 8 pound puppies. Davis at 60 pounds and Maggie Mae at 34 pounds have no clue about personal space. Poor Steve and one of our granddaughters have both of them trying to fit in. The dogs didn't seem to mind very much, although I must say that they all looked a bit squashed.

One day as I was writing and trying to work a feeling of claustrophobia came over me. It felt like none of us had our personal space. So, we opened up more space to both of our dogs. The gate to the breakfast room came down, and the foyer gate folded up and was put away. The only space that they could not go was the Reading Room and to the stairs. The upstairs is really not a problem except that I am the one who worries they will get in their chasing zoomie stage and someone will get hurt if they fly up and down the stairs. We keep all doors closed from our days of only having Davis. He could go up and get into no trouble plus he very carefully went up and came down at a slow pace due to the hardwood floors and slipping, which he did only once. Smart dog - he remembered.

As far as the Reading Room, Davis has a bad habit of wanting to get one certain pillow and usually just carries it around but every once in a while will try to shake the living daylights out of it. So we only let them in this room when we are in there reading and then they can play. 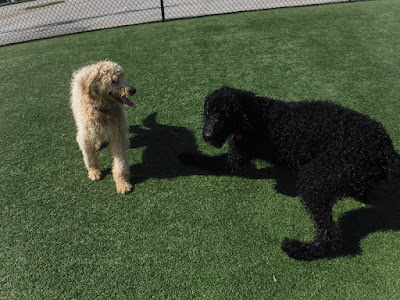 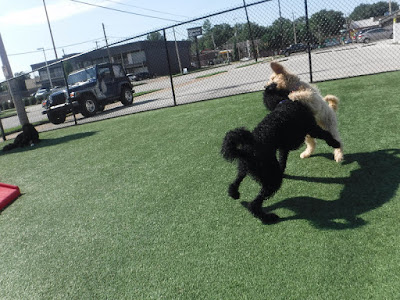 We do not have a fenced yard that allows for running around and getting their energy out. As the pictures above show, they adore the freedom to romp and roam and even when they do play with many other dogs while at WGAC Doggie Daycare, they manage to get their one on one time with each other to play together.

Now with the configuration that we have set up for our two furbabies, they seem so much happier and at peace. You can almost set your watch by the times they choose to play tag and chase each other around the kitchen island, through the breakfast room and around that table and then move on into the dining room and around that table before Maggie comes flying into the study and leaps up on the love seat only to then leap on top of Davis.

Total entertainment to watch the two of them play out this cat and mouse tag game. At times it is almost like watching children play hide and seek. One is in the study being as quiet and still as they can while their eyes are looking right and left to see which doorway the other one is going to come through. Davis knows how to tiptoe quietly. Maggie Mae has learned and she reminds me of a cat creeping in ever so slowly to surprise him and leap on top of him. 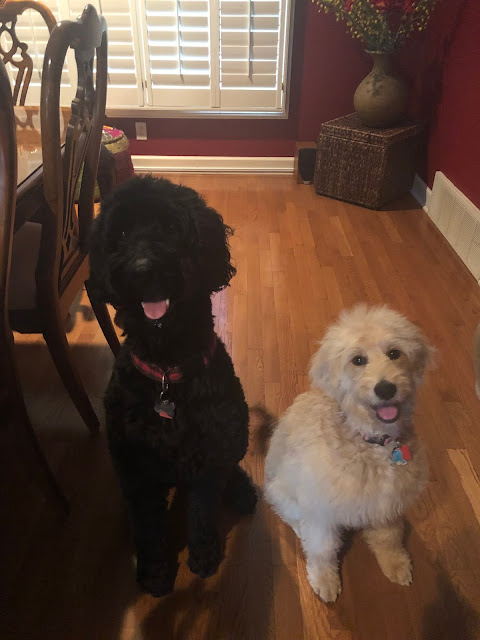 Davis and Maggie Mae seem so happy with their new freedom and so far have not abused this privilege once I removed a tall vase with long wooden twigs in it. Maggie Mae thought it was something to chew on like twigs outside. Creative placement for that temptation solved that problem.

Both Steve and I must say at least several times throughout the day of how we could not imagine our lives without these two crazy and loving 'doods.' When we go somewhere that requires a quick run in to pick up something, or drive through bank teller or pick up quick items, they love to get seatbelted in the car and come along. One of us stays in the car with them with the air on in our summer heat here. They have learned all the clues from one of us saying are you ready to go, or if they see me get my shoes on and grab my handbag. The two of them run to the kitchen to stare at their leashes to go to the car. They love it when they get a treat at the bank or pharmacy drive-thru. But their favorite? 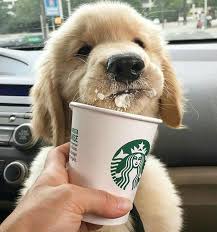 You guessed it! A puppuccino at Starbucks!