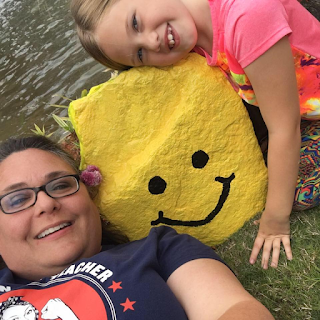 Throughout my life, I have had the good fortune of living in different parts of the country.  Born in San Antonio, school years in Memphis and Oxford, MS, then on to Pennsylvania, Houston and finally back in Memphis.  I am here to say that there was a community spirit in all areas where I have lived, however, there is something very magical about the people in Memphis.It is a quiet, yet overwhelming "southern thing," that I have not picked up on, even in other southern cities. With that said, let's get on with my blog (901, by the way, is the area code for Memphis).

Memphis loves its heritage.  There is even a celebration on September 1 (901).  They can make a reason to celebrate when others would not even think twice about it.  Call it the culture, the climate, the human spirit, you pick your own word.  It is here. A celebration always going on is a good way to look at it.

Sometimes you are in the right place at the right time. Your path crosses with another's that will help to make you a better person for it.  For me, a number of years ago I met a very special woman.  She had a smile on her face for everyone, as well as a humorous outlook on life. Amy McSpadden took this outlook and ran with it; an idea that has taken Memphis by storm.

As soon as I read about it on FaceBook, I wanted to be a part of it. Amy is a very creative soul, an artist who loves bringing her community together. The ideas that Amy, along with her friend, Lisa Dawson, the founder of this project, continued to grow as they worked together to make it all happen. They are true believers in Memphis and love the good things that are going on in our city. The expression, "901 Rocks" came to be.  They started to paint rocks with '901 Rocks' painted on them, as well as characters. Then the idea was to hide them and let others find them as a treasure. They had a 'Closed Group' on FaceBook that started as 4 and grew by leaps and bounds daily. Now the number of members in the group is over 32,000.

Members would take a picture of their rocks and give a clue about where they may be taking them to hide.  Others would take pictures of the smiling faces of those who found them and tell where and how they found them.  Most of the time, the finder would post where they wanted to re-hide the rocks so that others could share in the joy.  Members have posted that as much fun as they had in finding the rocks, it is even more fun to hide the rocks and scroll the FaceBook page to see if anyone had found what they hid.  Who knew something so simple could take off like this?  I have not even mentioned the happiness that it brings the person painting the rocks.  It is an all around fantastic experience.

Amy and Lisa have been featured in the local papers, as well as on local news programs.  Their enthusiasm is contagious.  Members write in asking what kind of paint is the best, what kind of gloss do you use, how do you get the lines thin?  Some of the rocks are very detailed and then some are much more primitive, such as mine.  I loved the fact that my granddaughter found some of the rocks that I painted and loves them.  She calls them her pet rocks. 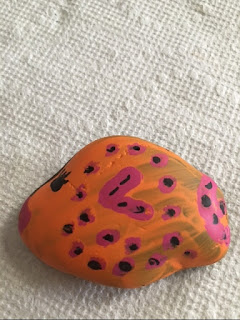 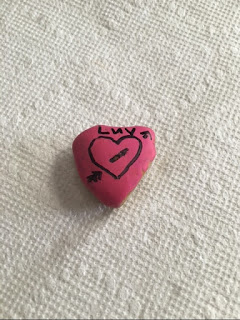 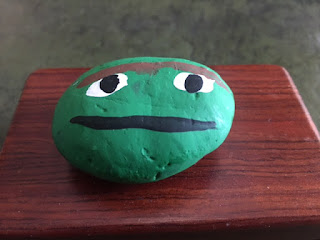 Truly, I was quite proud of my rocks.  She wanted the fish and the heart rock, and left the one that I did to be Oscar.  I thought it looked a lot like Oscar, the Grouch.  She thought it was a Teenage Mutant Ninja Turtle.  Oh well!  Each person sees art in a different light.  Who am I to say? She is four years old and has a lot more imagination than I could hope for.

There actually was a member of the group who asked for a pen pal from Memphis so that she could paint rocks and send them to her pen pal to hide.  One other aspect that is coming to light is that there are other cities who are picking up on this with their own area code to help rally around their city.  It is contagious and spreading like wildfire.

Let me share a few pictures so that you can see the creativeness of the 901 Rocks group: 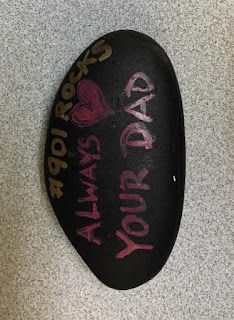 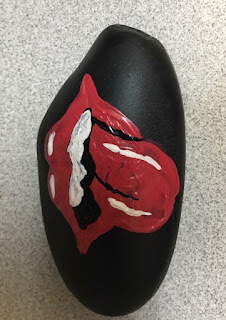 Against the odds, that many would have us believe, there is so much positivity and hope in this world, let us never forget it. Let us always be a part of it.  We are all in this together. We are lucky to be Walking in Memphis!
Posted by djmilestones.com at 4:04:00 PM