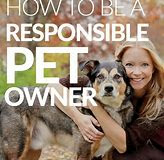 Most of us all want to be considered a responsible pet owner. If not, then shame on you! Steve and I actually were really wanting to have a dog to come home to daily. However, it would not have been fair to the dog if we had one while we were working. Our hours did not allow for a dog to be home alone, not going out and receiving one on one interactions. We did not know anyone who could come a few times a day to let our dog out and go for a short walks each day.

To each their own, but for the kind of dog that we wanted, we did not want our dog out in weather, even with a nice dog house. We wanted an inside dog. I understand hunting dogs, as long as they are well protected against the elements, probably do belong outside. Our yard just was not a suitable place to have an outside dog, due to a swimming pool.

So what did we do? We waited until I retired and then did some research on which breed of dog would fit our lifestyle. There are some wonderful rescue dogs and some of them you do not have to go through the "puppy stage" with them. We, however, wanted to start at the beginning of their lives. I have heard many wonderful stories of adopted rescue dogs. Not knowing enough about dogs, I know that it is also not quite so easy finding out the history of most rescue dogs. This was important to both of us, as we have grandchildren and need a dog who will love to be around young children. This was not an easy decision and took much research.

We wanted to find a breeder of golden doodles that was nearby. Goldens are known for their goofy personalities and intelligence. They do seem to be hypo-allergenic but we did not get one (or two) who do not shed. They don't shed much, but they do shed in tumbleweeds rolling across the floor over to a corner. (Roombas help to control this.) Luckily for us, through a friend from high school on Facebook, she gave me a name of a breeder only about an hour or so away.

I called Kim Mills Davis, owner of Doodles by Design and we were able to come to her house to pick out the remaining pups in the current liter. We were able to see the Mom and Dad and how wonderful she kept them in their own special home. It was clean and she was so loving with them. We are hands on and our first puppy definitely chose us by climbing all over Steve and being persistent, even though one of his little sisters kept pushing him out of the way. He was ours. Stole our hearts immediately. 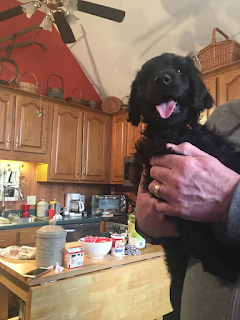 We were like parents of a newborn. Davis Miles came home with us at 8 weeks cuddled in my lap wrapped in his red fleece blanket that Kim gave us with the scents of his liter mates.

It was not that difficult, actually. He caught on to ringing the tinkle bells to go out and not once had an accident in his crate that he went into at night. We did leave it open during the day and he went in and came out as he pleased. It was his spot. We did limit the spaces in the house that he was allowed to go and that helped in two ways: having an accident or mainly getting hold of a tea towel, a pillow or something that he was not to have, including chewing on woodwork. He was our chewer.

When he became old enough to be neutered, we
talked to our vet. It is something that ALL responsible pet owners should do unless they are going to become a reputable breeder. After getting it all set up, the day came and all went well until we came to pick him up and this is what we saw: 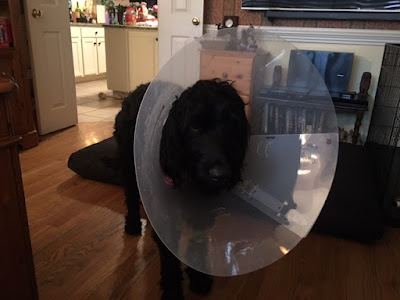 Truly, it was pitiful. I had seen these contraptions before, however, I was sure that this being 2017, something better was out there to use to keep pets from licking and tearing their stitches. Obviously, not.
Davis barely fit through doorways in our home, much less the car. It was hard to get a drink or to eat, and forget about a comfortable sleep. We had to fold it in to fit him in his crate and there was no turning around inside. We had 11 days of this torture. He went through it more than we did but it tore us up to see him like this. Happy days when he got it off, yet this was not before he had chewed it off and had to get a new one. Pieces of plastic were everywhere and who knows how much he digested? Thank goodness, not enough to harm him.

Time marched on and we were happier and happier with having Davis around. It was wonderful when Steve retired and Davis did not have to race to the back door when he heard the garage door open, knowing that Steve would be coming in to pet and play with him. I was with him already all day so I became something like chopped liver.

More and more we were seeing and hearing that two doodles were better than one. We ignored it for a while and then saw how others played together, and had a playmate always. Maybe they were right? We really did not pursue it until I noticed on Kim's page, her new liter of puppies. Two liters, in fact, ranging in cream, apricot, red, chocolate and black. Davis was black and gets loads of comments about being a black goldendoodle. His Mom was a standard black AKC poodle and his Dad was an AKC English Golden Retriever. All of the pups were black.

These two liters were F2, and parents, who were there on the premises, were both golden doodles. We were thinking that we would like a mini goldendoodle because Davis is 55 - 60 pounds. These puppies were not minis, however, Kim's guess would be  40 - 45 pounds based on parents. DNA plays a big part in this. Davis has a liter mate who is 95 pounds. That's a big puppy dog. And doodles do think they are always puppies; little lap dogs. 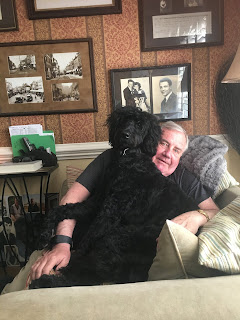 We decided to go with Davis to see if any of these puppies seemed the right fit for our family. One of the females started nuzzling Davis and both of their tails were going non-stop. 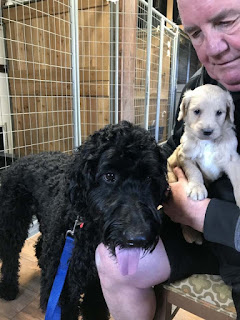 Davis and Maggie Mae became inseparable from the very beginning. Where he went, she went and wherever she went, he went. They shared everything. 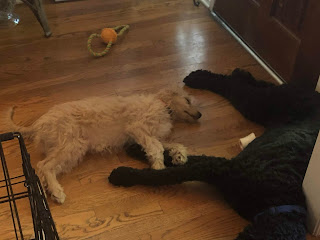 No squabbling, mainly because if they both received a bully stick, they went off happy for about 2 minutes and that is when Maggie Mae took Davis' stick and also had hers. Davis just let her, knowing that he would get it back soon. She was ruthless with him, pulling on his tail or legs or ears. He just let her play. Once he thought that enough was enough, he gently put one of his big paws over her to quiet her. She listened. Dogs have their own way of communicating. 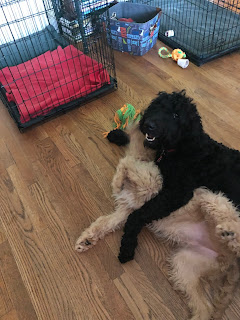 Maggie Mae was turning 6 months and we decided to go with our wonderful vet's advice that research shows owners can do it before or after first heat without worry. Now was the time. I was already dreading that cone coming home with her after the surgery. I had some friends who told me that they trimmed 5 inches off the diameter to make it more manageable. Others told me of a 'onesie' like babies wear. It snaps to let access to go to the bathroom, yet keeps the pet from licking at and tearing into stitches. I asked our vet about that one and they did not approve of those based on the fabric not allowing the stitches to heal. Guess it depends on the stitches and whether they are covered in bandages, etc. 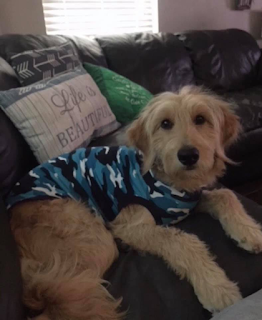 She did say, however, that they now used the 'E-soft cone' that was a soft pillow around their necks. Everyone of her clients loved these. They work and they are cute as can be.

Below are some pictures and a brief history of how 'the cone' came to be and how things are improving. 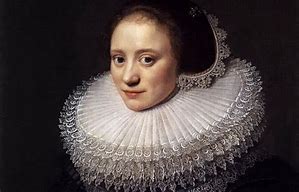 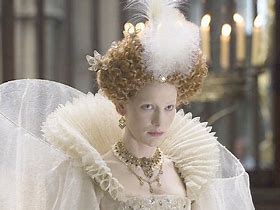 Veterinarians actually used whatever they could to make do with a cone shape our of cardboard or even the film of old x-rays to help their pet patients stay away from their stitches. The E-collar was actually patented by a man in the U.S. in 1959. It is like the one that Davis wore in the picture above. 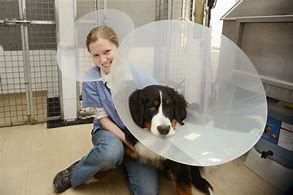 If you look at this E-collar, perhaps you are like me. This is just plain "overkill." Way too big. This large dog would be like a bull in a china shop wielding this thing around. Surely there is a better way? 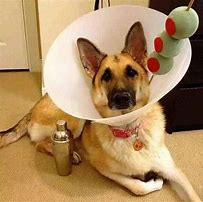 And no! This is NOT the way. I must admit it did make me chuckle. It does show the absurdity of it all. At least there the cone was not the size of the poor dog in the picture above. 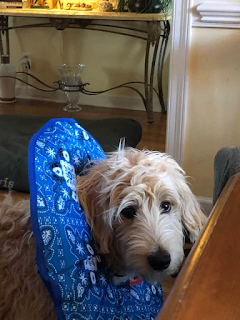 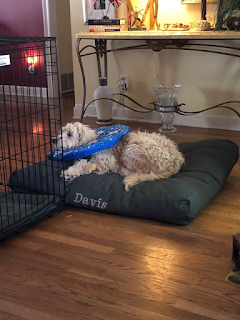 This is our Maggie Mae wearing the soft E-collar. Although she does not look to be smiling, remember she just had surgery. She can at least fit through doors and has a nice soft pillow to rest her head on when she sleeps. It does not look to be some archaic device from the dark ages. We are so happy that if she must wear one (and we get why she must) this is the one that works for all of us.

Some friends have told us that they could take off their doodles e-collar because their doodle did not ever bother their stitches. Well, I did try that and within 2 minutes, Maggie Mae was working at licking the bandage and tape over her stitches. The collar went right back on. That is just not her personality.

We are counting down the days to when she gets this off. 7 more days. We can do this! 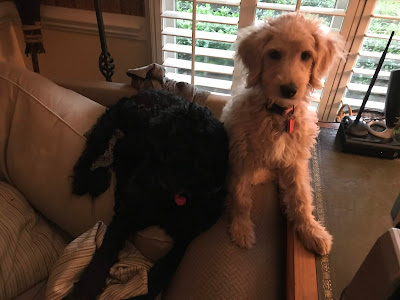