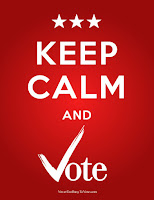 There are countless people that I have heard complain that they are already tired of the endless media releases of what is happening in politics for the upcoming Presidential election.  Even to the point of sharing that they wished there were someone more competent to vote for than the names currently thrown out from the hat. According to the polls, people do not know who or what to believe. (In the last three general elections, less than 50% of the population have actually voted.)

It seems as if year after year, the negative campaigning has become worse.  Maybe it is just all of the social media that is out there and available now and still continues to grow.  The quote that gave me the idea to write about this on my blog says, "There are two types of tired, I suppose.  One is a dire need of sleep and the other is a dire need of peace."  My tiredness, as so many others seem to be, is the dire need for peace.

Enough is enough, I find myself saying to some posts on Facebook, the newspapers, and other places where news of the candidates are posted.  Especially, when others, many that I know personally, seem so full of bitterness and hatred against the other candidates, whoever that may be. Let me just put this right out there, front and center.  I will not endorse any candidate, here or elsewhere.  To me, that is a private matter.  What others wish to do, is their business.

For those politically inclined to do so, I ask that what you repost, retweet or simply put out there in your own words from something that you read, please consider the source from where the information came.  It becomes a matter of using your own brain and judgment to sort out the facts from the fear that some organizations or groups are trying to use with the public.

Often, I ask myself why others that seem very capable do not run for the office of the President of the United States?  To me, the answer is quite simple.  Why would anyone want to put themselves out in front of the firing squad?  No one is perfect.  No one has the perfect family.  The media will dig some of your past up and make your whole life and those that you love completely miserable because after facts come out, then the twisted stories get made up and it becomes hard to distinguish facts from fiction, no matter how hard you try to defend yourself with the truth.

At least we live in America where we do have freedom of speech, I just find it a shame that this freedom is often abused.   Yes, I do know the difference in the importance of a campaign in a large school for school president and other officers vs the campaign for city, state and federal offices.  It just seems strange to me that we teach our young people to be mindful of how they run their campaigns yet when it becomes the adult version, all of the rules are thrown out of the window.  It is considered okay to bully one another, as well as to bully their followers.  What ever happened to the concept of let's agree to disagree without becoming angry and disrespectful?

This is not just the media.  Many times, it is the actual candidates behaving this way.  When I watched part of the debates on YOUTUBE, because I could not take watching the whole live debate during prime time,  all I can say is that what I witnessed was like watching something along the lines of the Jerry Springer show. In my mind, all I could ask myself about what I was seeing and hearing was if this should be the way that potential presidents behave?

There will come a time that enough people will form a majority and stop all of this type of campaigning and just get back to facts that are based on proof.  I am definitely tired of it all and in dire need of peace.  Let's give peace a chance.
Posted by djmilestones.com at 5:11:00 PM