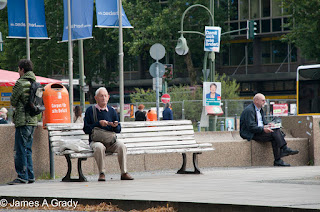 In the time and age that we live in now, I do not know too many people who can pencil in their schedule time to people watch.  By people watch, I mean the art of going out on a particular day at a particular time to just watch people.  The exceptions to the rule may be those who go out to watch people for sketching/drawing purposes or to study a certain type of person for a character role in a play or movie they are soon to audition for or perhaps have already been placed in the cast.

Most of us end up people watching while we are sitting in a doctor's office, waiting in line somewhere or waiting for a friend in a public venue such as a restaurant, bar, movie theater, mall, etc.  It is not a hobby, but a subconscious activity usually.  Once you do realize you are actively people watching, you should be aware of the unwritten rules involved.  Really, I can't say the rules are unwritten, because WikiHow actually has a list of them.

In this blog, I will summarize some of what I read because I do know that I actively people watch while sitting out in public, basically to avoid boredom.  Certainly, I do not want to appear as if I am staring or heaven forbid that someone would think I was creepy or just plain nosy.  So, I do try to be unobtrusive as possible.
I find myself trying to guess each person's story, such as what their occupation may be, do they seem happy or sad, are they into fashion or not, do they look like someone I know or even a famous person?  More than just me being nosy, it is a creative outlet, which is harmless to everyone involved.  It helps to pass time in a creative way when you have no choice but to wait.

It is watching with good intent and not coming on as a voyeur or a nosy body, plus always being aware of other people's space and privacy.  Know if you need to stop watching by either smiling and nodding. If close enough, engage in conversation, if they seem as if they may like to talk or just look away from their area or move to another location if possible.  It should not be obvious that you are staring at just one person.  Thus, the plural:  people watching.

You can use people watching as restoring your sense of wonder. Children are renown for people watching.  This can help you regain your sense of childhood wonderment.  It is also inspiring, as it can lead to characters in a writer's novel, words to a song, sketched artwork or even a post on a blog.  It is definitely more healthy and interesting than cruising through some of the social media such as Facebook or Twitter.

Charles Bukowski, an American writer, once said that he liked to prowl ordinary places and taste the people - from a distance.  He used people watching quite often as his inspiration for his poetry, novels and short stories.  For me, as a writer, it is nice to watch from a distance, yet also to get involved sometimes in conversation. Everyone has a story and most of them are oh, so very intriguing. Watch, listen and learn.